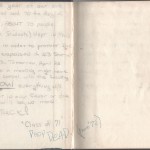 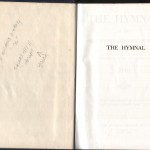 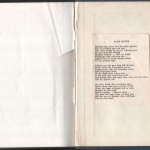 Here is what historians call a primary document, scanned from my old copy of the 1940 Episcopal hymnal. It tells its own story, the 1970 student strike at Shattuck School in Faribault Minn., which I believe was over hair. I would be interested in the story from someone who was there; I was only there for a little of the backwash fifteen years later.

In politics there are traditionalists, conservatives, and progressivists, hankering for the past, the status quo, and the future respectively. When I was around in the 1980s, Shattuck was divided between traditionalists who liked our military / church school / finishing school backstory, and progressivists who wanted something Not That: something more secular and co-ed, and I’m not sure what else. A lot of the differences were just about style, and they were chewed until tiresome.

One reform was replacing chapel services with Thursday-morning “convocations,” which I actually found interesting. One morning the convocation was Cheryl Younger, the school’s head of public relations. She was definitely in the progressive camp, wearing sneaky culottes and producing serify, graph-paper graphics in the style of the times. Cheryl had had it up to here with traditional bunk, and basically just stood up and said so at length. I’m sure she laid out a whole vision, but what I recall is her saying: look, no one needs need to tell me about the past; I’m the one (as the school magazine editor) who has to interview those old alums (the “Old Shads”) and listen to them go on and on (she may have said drone) with their endless stories (she may have said boring (ahem)).

Well that made a stir and the next week the convocation was Phil Trout, an Old Shad who taught at the school, apparently for life. Phil was a blond-haired Minnesotan in his thirties, a fairly preppy Amherst grad, an erudite guy and a character. Walking to the chapel someone spoke to him and I heard him reply in joke grandiosity, “Yes– an answer to last week’s address!” So I was surprised that he didn’t say anything at all about the previous week’s speech, its speaker, or indeed anything at all about the issues of the day. He just stood up and told the story of the 1970 strike. Ancient history from the age of bras and draft cards burning. But I recall it came down to long hair, the school barber shop, and confrontations that escalated until a bunch of cadets (still cadets for a few more years) marched out of the dining hall and to the very chapel where we were sitting, where they camped out overnight to confront the faculty in the morning. The pews faced the aisle, and I pictured boys on one side and Authority on the other. Phil read the brief, firsthand account, penciled in the front of a blue hymnal, and it made him laugh. I didn’t understand.

Not long after it was time to throw out the old hymnals for new ones. A couple of us typed up all their handwritten notes in the school paper and then told the boys they could take them if they liked. Some younger kid picked up the one with the strike in it but I pulled rank and said no, that was mine. Sorry, kid; here’s a picture.