In this series I have been seeing how cheaply and lightly one can do good rephotography, with the goal of increasing its production by several orders of magnitude. Today is an easy one: easy ways to know that your camera is level and pointed in the right direction.

If you pan your camera 360º around on a tripod, but the tripod isn’t vertical, you’ll end up with a panorama that arcs up and down like a sine wave. I think it’s pretty, but most people don’t want that. They crop it square and throw some image away. So people want their camera level.

There’s a distinction here. What you really want is not a level camera, but a level rotation. A vertical axle. You could get a level camera by tilting it at the top of a leaning tripod, but when you started panning it would follow the tripod’s crooked axis. So a level attached to your camera isn’t enough.

The normal way to stay level is a great one: just buy a leveling “head” for your tripod. And even my cheesy tripod has a bubble level that tells me when the vertical shaft is vertical. But I know it’s lying.

So I pulled the oldest trick in the book (e.g. Isaiah 28: “Judgment also will I lay to the line, and righteousness to the plummet”), and I made a plumb line. I wanted something cheap and slightly heavy, so I took the pull chain from a closet light and cut it almost as long as the tripod’s central shaft. It hangs from an O ring, much more durable than a rubber band, which cost me sixty cents at Ace Hardware. Originally I hung three chains, one inside each tripod leg, but over time I came to use just one. I keep it in my bag between sites.

I think the tripod is vertical if the chain looks parallel to the shaft when looking from the side and down the shaft: 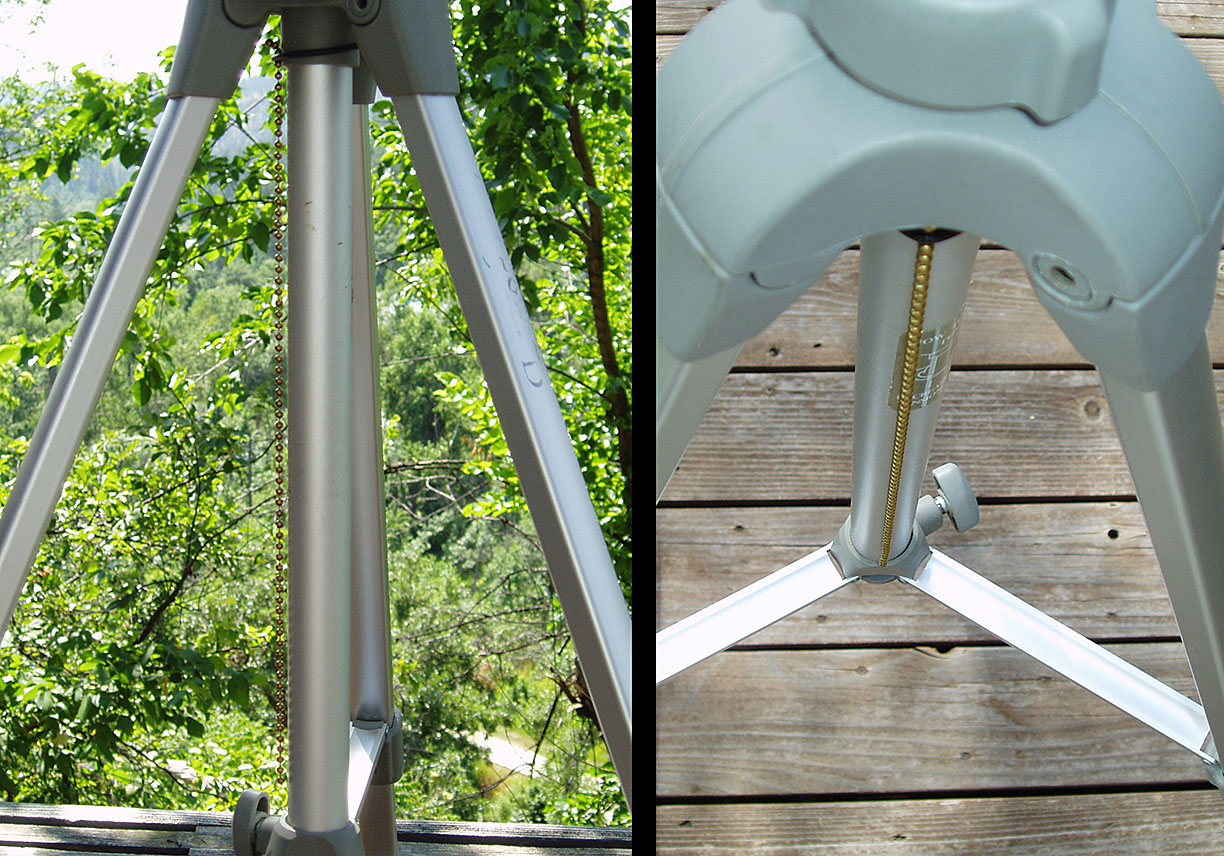 The clear downside is wind; if it’s breezy I hang it in the lee and calm it with my fingertips. It seems to produce some pretty level panos:

I’d like that straighter, but on the other hand that was a challenging shot, and the stitching inserts issues. I think the bottom of the 11″ chain is within 1/8″ of the top. SOH-CAH-TOA tells me that’s within 0.6 degrees of vertical, and I bet I’m often well within. At that point the other errors are piling in anyway, like the sliding spongy ground, the weight of the camera, the tripod just rubbery.

And I don’t ever worry about calibration.

This one is even more obvious. People shooting panos want the right amount of overlap between the individual shots, and they obviously don’t want gaps. So they control how much they pan each time, usually by a protractor built into the head of the tripod. This protractor can work by eye or by “click stops” at a preset number of degrees.

I didn’t much care until I started footprinting my shots. 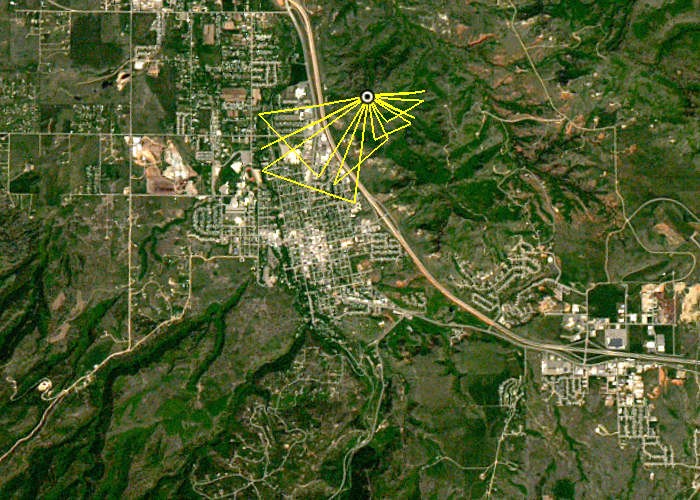 At that point I thought the world would be simpler if I just shot them by the clock, every 30 degrees. Then for example I could just enter 0, 30, 60 etc. as the nominal heading in Google Earth. I went around with various schemes before realizing that my tripod legs were at 120 degrees, and that my camera was rectangular. And that 120 – 90 = 30.

I think of this as Scruggs-style pano. Rolls-of-three in four.

In other words I point the tripod’s “front” leg (arbitrarily the one opposite the crank) north by my cheesy compass and aim the first shot there. Then I go to the next leg clockwise, but I set the side of the camera, not the front, perpendicular to the leg. Here’s a fancy drawing that overcomplicates it: 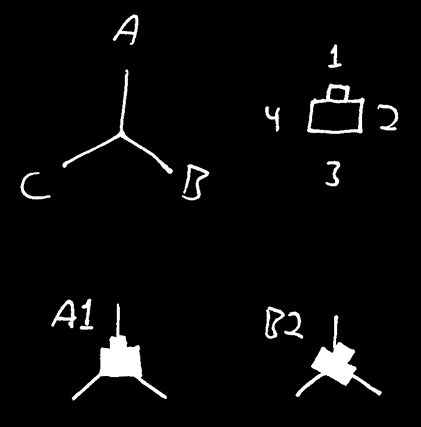 The nice thing is that accuracy doesn’t matter here. The errors aren’t cumulative and they’re well within the overlap. The downside is that you appear to my wife as an idiot walking in circles around my TV room till you figure it out. But she won’t tell.